Now is the perfect time to actually use semaphore with your group. Scouts can social distance and send messages to each other!  Semaphore a method of sending messages with 2 flags, where the flag positions indicate a number or letter. While phones may have made the need for using flags for long range communication obsolete most of the time, this is still a neat activity to teach scouts. It is also still used at times by ships transferring cargo and is learned by the Navy for use incase of power outages. But because it isn’t commonly known, you can explain to your scouts that this is going to be their own secret code that they can communicate in without even talking!

You can have them make semaphore flags with 12″ dowel rods and felt, or purchase inexpensive flags designed to be party decorations.  If your scouts are industrious, making them could be a fun way to do a zoom meeting, as all the kids can craft together, with a parent’s help. And if your scouts aren’t yet ready to get together, even a field apart, you can work on those semaphore messages on zoom, or create videos scouts can watch and pause to decode.

How do you make semaphore flags from felt? Cut the felt into a true square first.  Then cut your square diagonally, creating 2 triangles. Use another color, and cut a second piece of felt the same way.  Sew the 2 pieces of felt together to make a new square with 2 colors.  Now, look at the pictures below of the flags to figure out which triangle goes which way, then fold the edge of the square around the dowel rod and sew into place. Repeat for the second one.  That’s it! You now have flags.

If you haven’t learned semaphore yet, here is website to help you: http://www.cranburyscouts.org/SamsPage.htm

And here is a course that may you further: http://www.cranburyscouts.org/Image/Semaphore/SamsCourse.htm

Here is one way to introduce semphore to your group from Andy Bicking of the 91st Sojourners in New York:

Overall, I found that the scouts needed to see a logical framework for how the code is structured, a chance to practice a few core concepts, and then be cut loose to explore and use it in a constructive format.

I taught them the “Grand Circle” (letters A-H), plus R, and then asked them to signal as many 3 or 4 letter words as they could think of. Then, I briefly explained the logic of the other 6 circles, and a few exceptions to that logic (letters J, U and V), and cut them loose. It was pretty hilarious seeing what they came up with. There were as many short hand texting codes as there were 3 and 4 letter words!

After a while, I reconvened the group and slowly sent them a message using most or all letters of the alphabet – something like “ 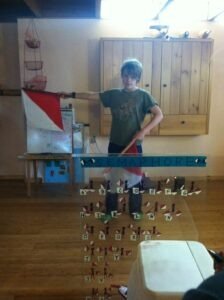 The quick brown fox jumped over the lazy dog.” After that, I challenged them to make their own video message to post on Facebook. But you may want to update that to whatever platform your scouts are using with parent approval.

Later, I painted the flags and figures on plexiglass, so scouts on the sending side would see the image they needed to present, and scouts on the receiving side would see what they needed to see, and vice versa. It works out really great when scouts are relatively close, but obvioulsy, when they’re too far away, its hard for everyone to see the images. At some point, I’ll make another so two signaling teams could look at their board from the appropriate vantage point across a field.

Below are the semaphore picture from behind and in front. Be sure your board works both ways by using paint pens to draw the stick figures carefully.  Building this does take time, but can be used by every scout for many years to come.

For safe use at this time, you may want to mark on the ground where your scouts should stand to keep them 6 feet apart. Having scouts who figure out the semaphore pattern spread out and send messages to each other should be interesting. If you make a plexiglass board to help scouts, make sure that they use it one at a time and don’t crowd each other.  If your scouts really take to this, you may want to try giving them directions to follow or have them take turns spelling song lyrics for the rest of the group to guess the song.

Remember that scouting is a game, so if the kids add their own “code” such as LOL(Laugh out loud), WYD (what you doing?), TLDR (too long, didn’t read), and BRB (be right back) remember that they are still communicating! 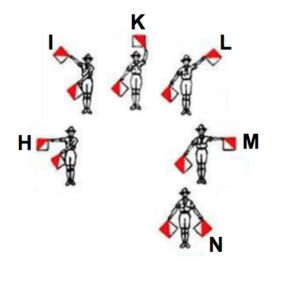 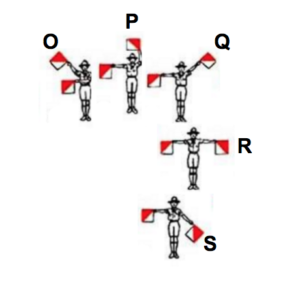 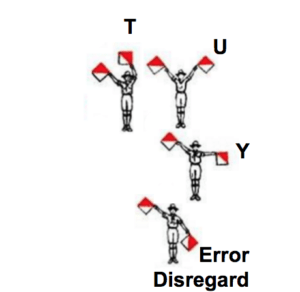 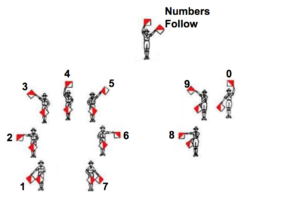